Protests and Resistance Across Afghanistan After Massoud Calls for Uprising 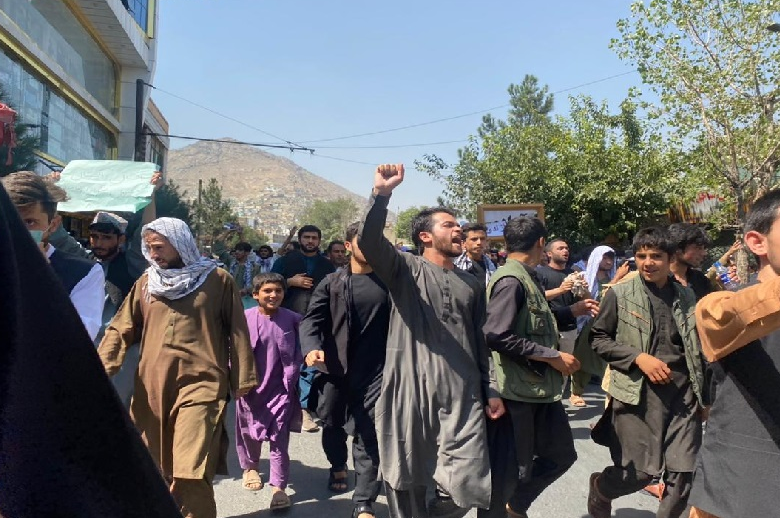 The Taliban have pushed their way into Panjshir Valley and captured Bazarak, the provincial capital. The Resistance Forces decided to pull back to the mountains instead of having a last stand at Bazarak. The NRF(National Resistance Front) were holding their ground for weeks, inflicting thousands of Taliban causalities. The momentum of the NRF was halted when drone strikes, reportedly flown by Pakistani Air Force pilots started to blast NRF positions.

After pulling back and avoiding Pakistani drone strikes, leader of the NRF Ahmad Massoud released an audio statement to his Facebook account. In the message he calls for a national uprising and vows the NRF will continue to fight. Now the following day the message appears to have been heard nationwide. Thousands turned out in Kabul and several cities in Afghanistan, chanting anti-Taliban and anti-Pakistan slogans.

As well as large protests, there are also reports of heavy ongoing fighting resuming in Baghlan, Panjshir and Kapisa provinces, with even unconfirmed reports of NRF recapturing Bazarak.

Colonel Raham Rahmani of Afghan Air Force on 07/09/21:
Taliban terrorists defeated in Bazarak, they were ambushed in Dashtak, people in Dara-e-Hazara (Abshar) are also fighting them intensely. Panjshir is becoming a multi-front battleground NOW. Panjshir holds longer than the whole Afghanistan, but the world community yet to respond!

The situation in Panjshir province is still unfolding, but one thing is certain, the Taliban are in Panjshir but they do not control Panjshir. They also now have to deal with all the protests and armed resistance popping up across the country. The Taliban will need to show restrain when dealing with the protests otherwise it will inspire more Resistance.

The Pakistani Taliban and occupiers have set up checkpoints in Kabul's Khasht Khokhtif Khairkhaneh district and are closely monitoring phones, especially Facebook and WhatsApp messengers. Please convey this message to your friends so that they will not be arrested and tortured! https://twitter.com/Resist_Ahmad/status/1466376647993606148